Thanks to the Makedonida’s load voices advocating about the importance of the Macedonian byzantine heritage, The New Times came to North Macedonia to write a story about the Church St. George in Kurbinovo and its conservation..A full page article written by the Paris based correspondent Celestine Bohlen was published on July 15 this year

Check out the orginal full article on here!

Or read it below:

KURBINOVO, North Macedonia — Poised on a forested mountainside high above Lake Prespa, at the intersection of Albania, Greece and North Macedonia, the church of St. George has kept the secret of its origins for more than 800 years.

Virtually nothing is known about who ordered the tiny church’s construction in so isolated a spot. Just as mysterious are the artists who painted its stunning ensemble of frescoes, with their elegant elongated figures clad in swirling robes, considered by art historians to represent the artistic pinnacle of the Middle Byzantine period.

The church and its frescoes hold a special place in the remarkable collection of Byzantine churches in North Macedonia, a small Balkan country that, after 26 years of independence, is still struggling to find its place in Europe.

Today, after years of delays, conservationists and local officials are making a new push to restore the Byzantine gem, which has been damaged over the centuries by fires, storms, two earthquakes last century and a faulty renovation in the 1980s.

They hope to capitalize on the cultural links that anchor the country’s European identity at a time when North Macedonia has taken the steps required to move forward down the path to European Union membership.

The church at Kurbinovo has already attracted help and attention from European scholars, architects and diplomats. Yet for now, covered in scaffolding inside and out, it remains a monument to the conflicts and frustrations that have dogged cultural politics in a country whose national identity has been pummeled by local and regional rivalries.

It was here on the shores of Lake Prespa that a historic agreementwas signed with Greece in June 2018 that settled on a compromise name for the former Yugoslav republic.

By rebranding itself as North Macedonia, the country of around two million people ended a bitter dispute that had blocked its bid for membership in the European Union and the North Atlantic Treaty Organization. 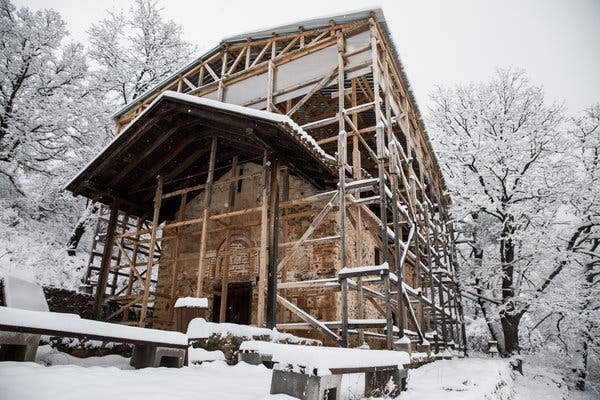 Even so, the European Union recently announced that it would delay a start to accession talks for Macedonia, as well as neighboring Albania, testing local patience with a seemingly unending process.

“Thanks to the pressure and the promise of Europe, we have done everything to satisfy their criteria,” said Bojan Jovanovski, a journalist based in the capital, Skopje. “Europe is the only unifying issue around which there is a consensus in the country. If it fails, Macedonia loses a precious idea.”

The promise of Europe is very much part of the recent history of the church of St. George, which Zivko Gosharevski, the mayor of the nearby town of Resen, calls “one of the pearls of the Prespa region.”

In fact, the church’s status as a national treasure is confirmed by the image of its fresco of the Archangel Gabriel on the 50 denar note, the country’s currency.

Mr. Gosharevski hopes to attract European attention to the region and its cultural attractions. “We want to benefit from the agreement and put Prespa on the map,” he said.

There has already been European interest in the church at Kurbinovo, thanks in large part to efforts by Pance Velkov, founder of the Makedonida Foundation, which promotes the conservation of Macedonian cultural heritage.

With the backing of the businessman and philanthropist Richard H. Driehaus from Chicago, Mr. Velkov has edited several guides to Macedonia’s churches and other monuments, including a 15th-century mosque in Skopje.

But St. George has received particular attention. There have been exhibits devoted to its frescoes in Munich, as well as in Skopje and Bitola, a regional center. 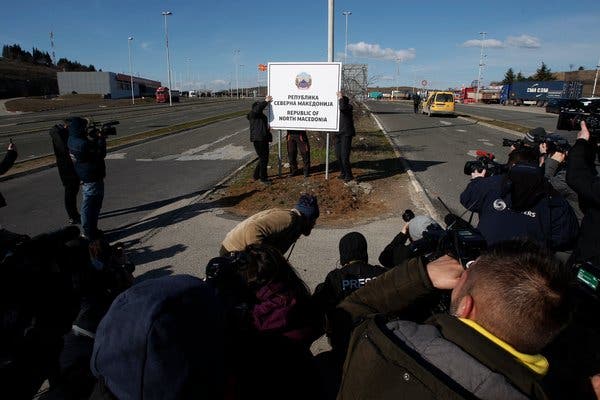 The church was also featured at a Paris conference held last year by the Future for Religious Heritage, a European network devoted to protecting religious sites.

In a documentary film produced by Makedonida, Christian Thimonier, France’s ambassador to North Macedonia, said that the church at Kurbinovo was a symbol of a common European cultural heritage that binds the influences of Rome and Byzantium.

“There is no more beautiful symbol of the Europe which we want to build,” he said.

Yet work at the church has stalled.

The scaffolding first went up in 2012. But the work stopped at the site in 2017 during an elaborate analysis of the scope of damage to the church. Meri Stojanova, the acting director of the NI Institute and Museum in Bitola, which is overseeing a portion of the Kurbinovo project, said in an email that the damage analysis was still underway and that the conservation project was expected to be finished in the next month or so.

There are various explanations for the halting progress over all, including the death of the chief conservator, Risto Paligora, last December, as well as funding problems.

“In Macedonia, the role of the government is very important, and from one year to the next it may not have the same priorities,” said Hervé Declomesnil, a French architect who has advised on managing the access to the church.

Mr. Velkov also cites repeated changes at the Culture Ministry, and notes that in a climate of constant political tension, “cultural heritage is not sexy.”

What has been sexy in recent years was Macedonia’s awkward embrace of Alexander the Great and his father, Philip II, the 4th- and 5th-century-B.C. rulers who came from the Macedonian region of Greece, the source of the name dispute. 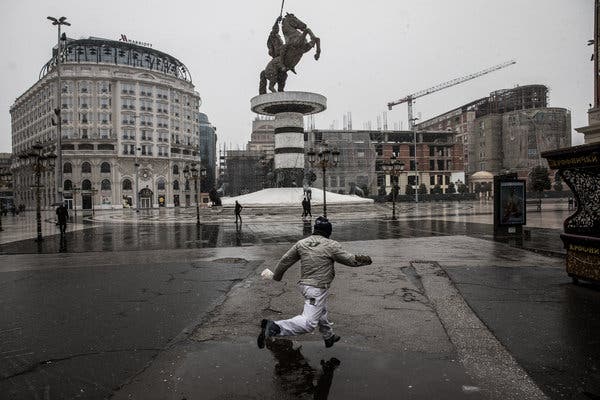 Their appropriation by Macedonia’s former prime minister, Nikola Gruevski — who after 10 years in power fled to Hungary in 2018 to avoid jail on corruption charges back home — only added fuel to the fire of Greek indignation.

“An attempt to find links to Alexander the Great is easier to do than preserving churches,” Mr. Velkov said.

In contrast to a lack of funding at several of the country’s cultural heritage sites, the budget for the gargantuan Skopje 2014 project, in the capital was extravagant, estimated at $730 million, with $9 million apiece for giant 70-foot statues of Philip and Alexander.

Meanwhile, St. George — where painting of its frescoes began in April 1191, according to a tantalizing clue inscribed on the altar — remains isolated, attracting only a smattering of visitors.

Those who make their way up an unmarked dirt road are admitted on appointment by Mitko Ristevsky, a retired electrical engineer who is the keeper of the keys, like his father before him.

Standing under the portico that shields the church’s facade, Mr. Ristevsky took in the view of Lake Prespa on a recent day. “This is why they must have chosen this place,” he said.

The story behind the church remains an enigma, and part of its charm. Some scholars say the patron was a local nobleman; others suggest ties to a monastery.

At least one of the artists is thought to have been educated in Kastoria, now in Greece — a link that Mr. Velkov finds particularly intriguing given the thaw in cross-border relations.

“Why did someone go to such trouble to bring such superb artists to this lonely place?’’ he asked during a recent visit. “What was going on in this region at that time?”